Yesterday, July 25, 2015 some really strong winds were predicted by the weather office. Ideal conditions with the amount of clouds and sun shine to take out the Leica with some ND filters 😉

Was the first time I tried this with some step up rings for Leica with the existing 77mm filters I had from my Nikon.

Some of my observations:

Leica 3.8/18mm Elmarit – Filter Holder 14484 – Who on earth designed that? I used it for the first time (was around 80Euros thus definitely not cheap). Those two large “looking holes” are really not helpful. Using such a filter holder generally means you would like to use some specialized filter like a ND filter. An for those I absolutely do not need those “holes”. Instead light is hitting the ND filter(s) from behind causing some nasty backlighting issues. Without having some duck tape with me that lens + filter holder went back in the bag.

The other bit I am not really happy about is that the Leica M does not allow exposure times exceeding 60sec. I find this a real pitty. When looking at pictures by Joel Tjintjelaar the effect he creates is only achieved by extending the exposure times a lot further than just 60sec.

Filters used were Haida 1000x and 64x. Most of the time I stacked both in order to achieve longer exposure 30sec+.  With using 77mm filters on the Noctilux via step up rings resulted in the problem that you can no longer use the inbuilt lens hood.  Depending on the angle of the sun I got sometimes some nasty light stripes/reflections, could have also been magenta bands as some report… with using the Monochrom I can’t tell for sure 😉  Example: 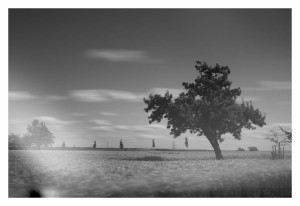 Instead of stacking multiple filters I ran today across some interesting single 13 and 16 Stop ND filter offered by an UK company called Formatt Hitech.  Sounds intriguing, having only one 16 stop filter,  yet on the other hand, Leica’s inability to go with the exposure beyond 60sec, rules it out as a camera for the more extreme long exposure photography 🙁

Update March 2017: The old M9 and M9 Monochrom are able to do exposures up to 240sec = 4min, but not the newer M240 and M246. Leica confirmed this to me and I got the confirmation e.g. from Mark Hilliard that he indeed is using the first M9 based Monochrom model and thus can go beyond 60sec and up to 240sec.

Gallery can be found HERE